High tide was at 3.12pm on December 27th. Cheltenham is difficult to swim at during low tide, so the best times to attempt are a couple of hours before to a couple of hours after high tide. I was there with family and unfortunately had to leave by 2pm. Even though I missed out on the awesomeness of a high tide at Cheltenham, the beach visit went swimmingly and included passage of a large container ship which propelled a few small breakers onto the shore.

View of Rangitoto Island and the container ship from Cheltenham beach

On Wednesday 18th December I had a late night swim at Cheltenham beach, Devonport. High tide was at 9.19pm. It is a while ago now (11 days) and my memory is a bit hazy, but I don’t think I stayed until high tide. Cheltenham beach is one of my favourites.

I was the only person swimming there. While I was drying myself after the swim, a passerby informed me that he found my swim ‘admirable’. Admittedly it was a bit chilly, and rather late, but I was surprised to be a lone swimmer. The night before several other swimmers were evident at Pt Chevalier beach. What seems to be going on is Cheltenham beach serves a much smaller local population than Pt Chevalier beach so generally attracts fewer people, despite the fact that it is a much nicer beach. This is because Devonport is a relatively small suburb that contains not only Cheltenham but several beaches, but Pt Chevalier is the closest swimming beach to many large Auckland suburbs such as Point Chevalier itself, Waterview, Avondale, Sandringham, Mt Albert and Balmoral.

That night I had a GoPro in a waterproof case in my possession. Some of the experimental underwater shots turned out quite well. I like videoing water even more than photographing it so a waterproof camera is fabulous, although you can’t see what you are shooting until you get home and view it on a computer but that is all part of the fun.The underwater video experiments I shot are on a computer I won’t have access to until next year so I’ll upload some in a few weeks.

I didn’t take many photos and they aren’t that great (the GoPro was the focus of my attention) but here are a couple. The photo of Rangitoto shows that the tide was not quite high at that point in time. 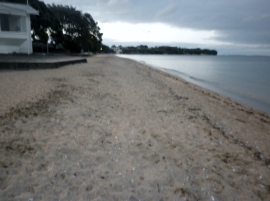 After sunset at Cheltenham Beach