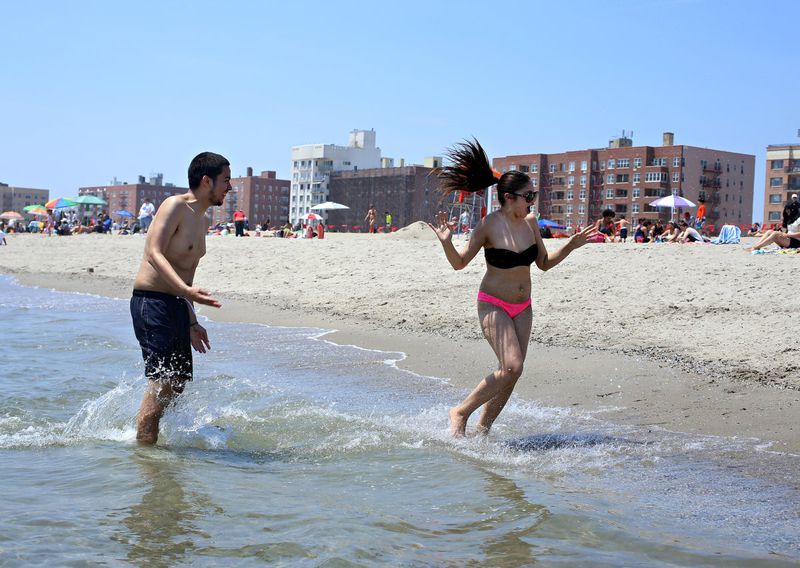 But it hasn’t always been plain sailing. The boardwalk was badly damaged by hurricane Sandy in 2012 and part of the beach was closed in 2018 due to erosion. 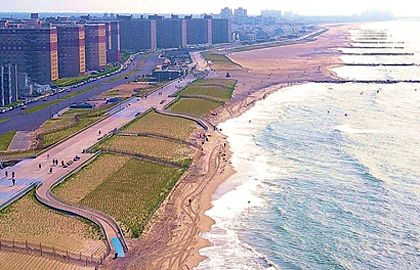 I would love to visit this beach some day. 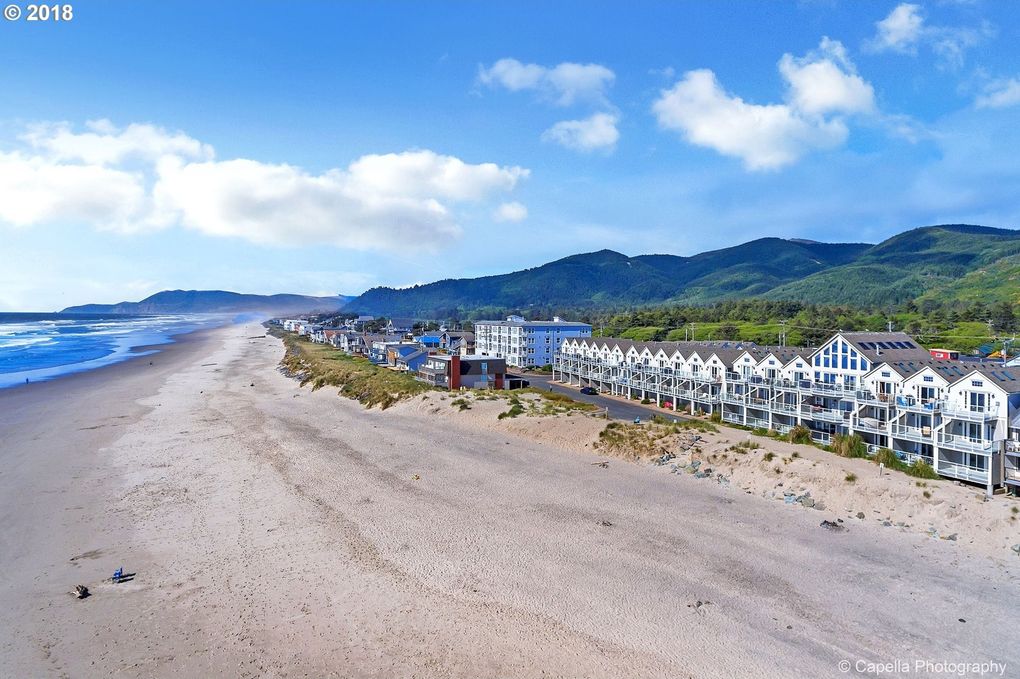 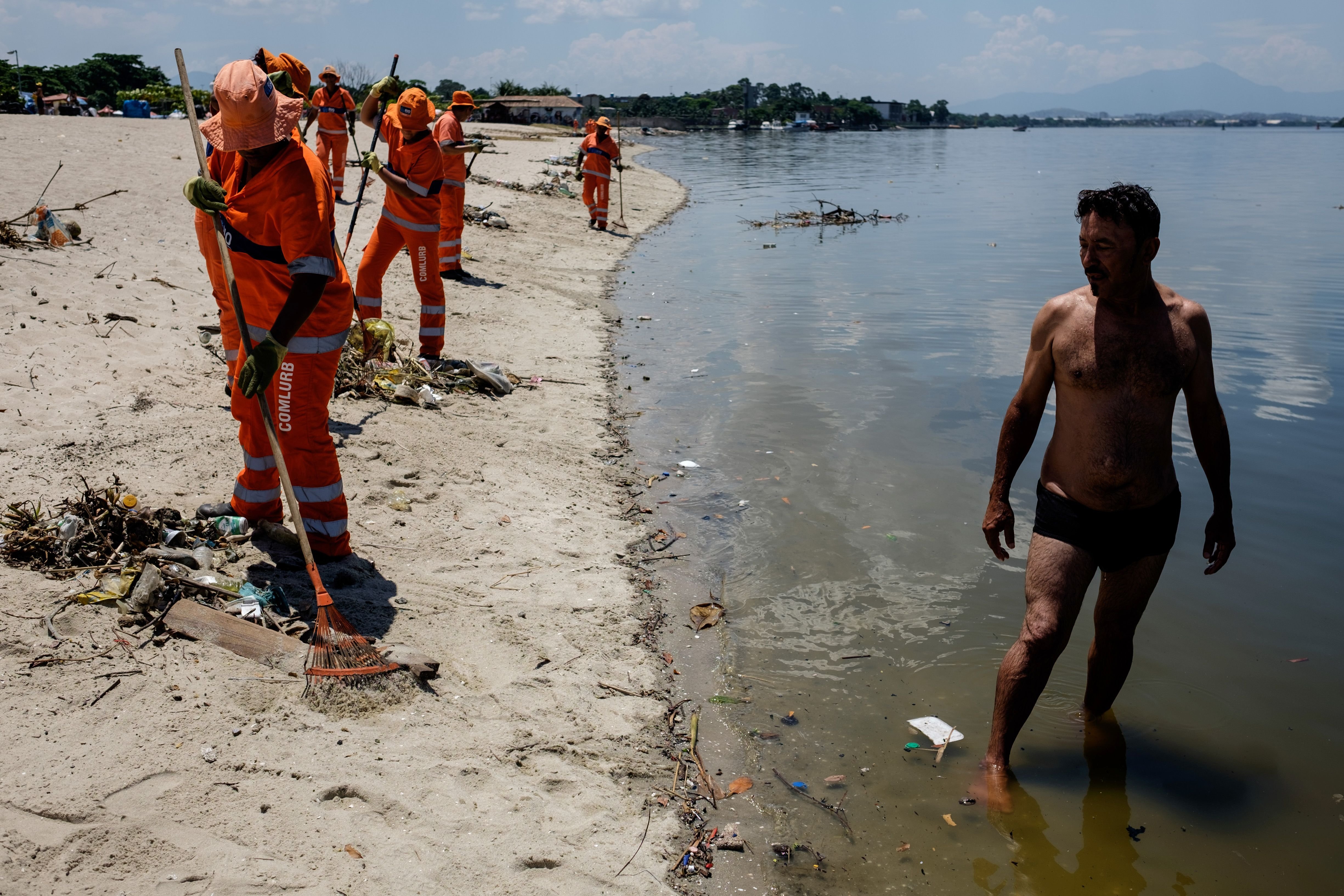 Studland Bay, Dorset, UK is owned by the National Trust so there is little development on the dunes and by the look of this photo, the beach seems relatively pristine. I would just love visit and stroll along here, perhaps singing a song a bit like this… ‘look at the stars / look how they shine for you…’

What’s so great about Studland Bay? Apart from its seemingly untouched dunes (which I absolutely adore – give me a ‘pure’ beach anyday!) it is the location of the Coldplay music video ‘Yellow’.

It’s a fabulous song – enhanced by the one-shot video of a solitary figure strolling in slow motion along a deserted beach as the light (post-production trickery apparently) changes from dark grey to light grey, fortunately never once even flirting with a hint of ‘yellow’ as we might expect from the song title. Interesting, though, that in the photograph above the sand is in fact golden (yellow?) whereas in the video the weather dulls it down considerably.

Suits my feelings about life at this point – solitary, slow-motion, grey with a touch of hope from time to time. Learning to accept the past and that we are all flawed, we all cause and feel pain, we are all heroes and villains, all day long. 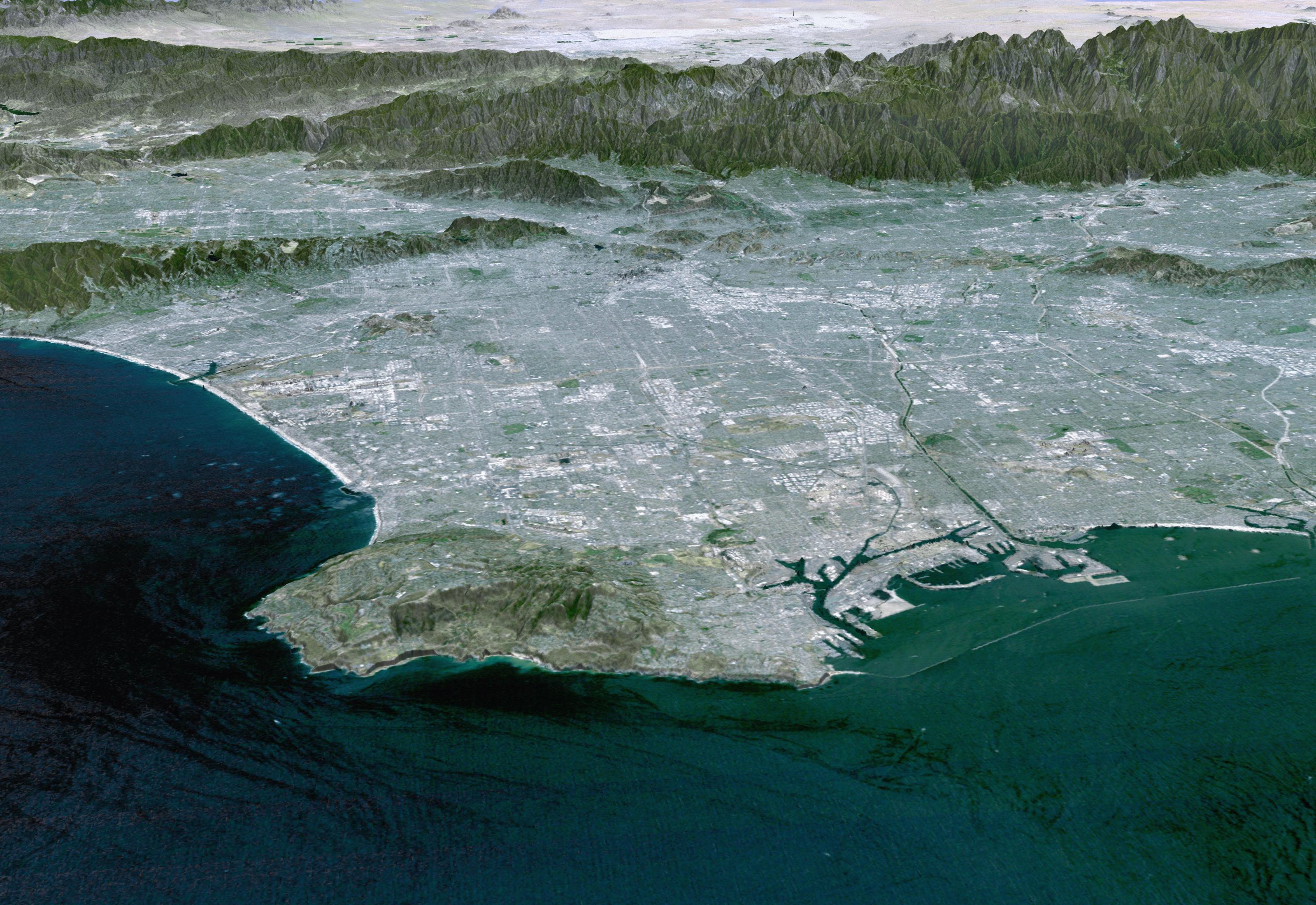 I want to write this – but now I’m (finally) all set to go (actually managed to login, then added an update to the ‘about’ page) nothing is happening.

Fear? Inertia? Cbf after all?

But the last couple of months have been different.

Cracks in the pavement

It is now August. It has been a difficult year, caught up in two completely different and totally bizarre situations that have thoroughly tested my boundaries and my faith in humanity.  I found myself searching for support and (re)discovered 12-step fellowship meetings. I have been a reluctant and semi-checked-out ‘participant’ in many meetings at various times over the past 15 years but this year I actually took it seriously and now, several months later, I am finding that these fellowship meetings are actually helpful.

That’s why the last couple of months have been different. I am able to identify my boundaries and limits, then separate myself from difficult situations in order to care for myself. And,  I feel comforted by these fellowships and by the wisdom they offer.

Except this – which appears to be a slightly different version of the ACA laundry list (from here – scroll down, scroll right down).

Anyway, item number 7 stands out particularly for me today. Plus 4 and 15, always. And others too, of course. Most of them, in fact.

As stated by Adult Children of Alcoholics themselves

1. We became isolated and afraid of people and authority figures;

2. We became approval seekers and lost our own identity in the process;

3. We are frightened by angry people and personal criticism;

4. We either became alcoholics, married them, or found another compulsive personality, such as a workaholic, to fulfill our need for and expectation of abandonment;

5. We live life from the viewpoint of helping and seeking victims, and we are attracted by that weakness in our relationships;

6. We have an overdeveloped sense of responsibility, and it is easier for us to be concerned with others rather than with ourselves;

7. We suffer guilt feelings when we stand up for ourselves; instead, we give in to others;

8. We confuse love with pity and tend to “love” people we can pity and rescue;

9. We have suppressed our feelings from our traumatic childhoods and have lost the ability to feel or to honestly express our feelings. Rationalization seems far easier;

10. We judge ourselves harshly and have a very low sense of self-esteem. We sometimes compensate for this sense of inferiority by trying to appear superior;

11. We are dependent personalities who are terrified of abandonment. We will do anything to hold on to a relationship in order not to experience the pain of abandonment;

12. We became para-alcoholic, taking on the characteristics of alcoholism even though we did not pick up the drink;

13. We became compulsive and obsessive in our behavior;

14. We are unknowingly trying to recreate the chaotic lifestyle with which we are familiar;

15. We are afraid of intimacy and have difficulty forming close intimate relationships;

16. We became aware of feelings which seem to separate us from others, and we find ourselves depressed. Depression is endemic in dysfunctional families

Got bored the two time strands – past and present – and catching up with the past. Got bored with taking photos at Pt Chevalier beach, I have a ridiculous number of them. But that doesn’t mean I won’t carry on catching up, but at a certain point I will run out of photos because I haven’t taken one for ages. And, then there’s no catching up to do because if there’s no photo, there’s no record of the swim. I’ve been going to Pt Chevalier beach nearly every day since about October last year. Except for the times I was at Agnes Waters in Queensland. Yes, you read correctly, that’s Queensland, in Australia!!! I have read that if you use more than three exclamation marks in a row, it shows you are a bit unhinged. Agnes Waters is a beautiful beach. I was there a month ago. Stupidly hot climate. Very warm water. Lovely swims. I have photos, somewhere… here are some. Totally unedited, so the colours and definition are a bit flat.

Swam today at Pt Chevalier beach, midday tide, sunny, lots of people. Didn’t make to the beach until well after high tide. The outgoing tidal current is strong so I decided not to swim to the buoy. Yes, that’s a development. We have been swimming to the buoy. There are three buoys actually, we have swum to two of them.

Sometimes I swim to the closest buoy by myself. That’s 15 minutes swimming each way, 30 minutes total. It might not sound like much but to me it’s epic. When I first tried seriously swimming freestyle again a couple of years ago I could barely manage five strokes without losing breath. Before that I tended to swim backstroke but now I mainly swim freestyle. So, I can swim for 30 minutes without getting tired.

And I’m reading lots these days. Glad I can. Brain function seems to be improving, finally. Read a Tim Winton novel last week. Currently reading Joan Didion’s ‘Year of Magical Thinking’. Plus lots of poetry. Language poets, and modernists. Missing when I was an undergraduate studying English literature. Same old story really – I didn’t realise how lucky I was. Would love to be studying literature now. I have a much greater understanding of the things they write about. Many of the works we read were written by people who are a similar age to what I am now (which is top secret, by the way). When you are twenty-something it is difficult to get a grasp on many of the big issues like death, ageing, the weirdness of time and memory, the importance of appreciating sunsets and even clouds…

I currently have a schoolgirl crush on this poem:

It is verbless. And I love it. Impressionism. Imagism. Modernism.

And I LOVE this one too…

William Carlos Williams. For some reason I missed out on the modernists when I was at uni. I did virtually every other poetry class but had a bad attitude towards them. Thought they were boring. ‘glazed with rain water’ … ‘Petals on a wet, black bough’ … soooo impressionistic, but in a unambiguous, clear way.